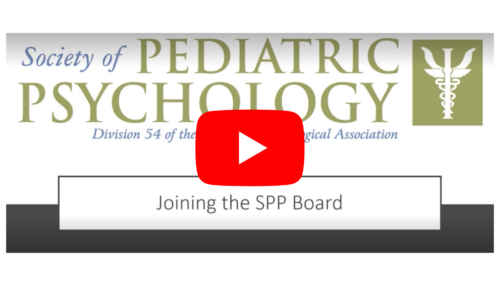 SPP is now accepting nominations for three positions on the 2023 Board of Directors. Elections are conducted by APA and will be held in the spring of 2022. Winners will be announced in June 2022. The term of office is three years (2023 - 2025) and includes participation in monthly conference calls and attendance at two Board of Directors' meetings per year. All nominees must be a member of Division 54 and an APA Member or Fellow.

Over the past year we have focused on improving feelings of inclusion within our membership as well as improving the diversity of our membership. We realize that many may feel that leadership opportunities often go to those members who are from more traditional pediatric psychology programs. We would love to have more members on the SPP Board of Directors from underrepresented groups. Thus, we want to specifically encourage both self and other nominations from those members from traditionally underrepresented groups. We believe that a highly diverse Board of Directors will increase our effectiveness and impact. Remember, this is YOUR Board of Directors, and it should represent YOU! Don’t be shy- step up and lean in!