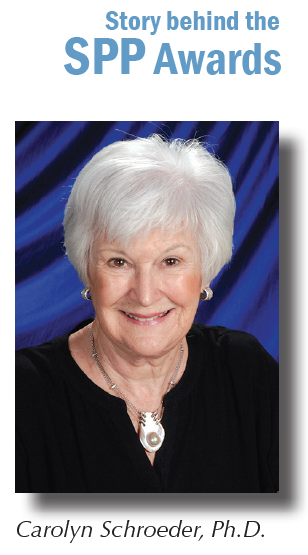 The newest annual award conferred by the Society of Pediatric Psychology (SPP) is the Carolyn S. Schroeder Award for Outstanding Clinical Practice in Pediatric Psychology. Award recipients are full time providers of direct clinical service (at least 20 hours a week). Their work may include direct care, program development, administration, or other evidence based clinical applications. This award was established in 2013 and is based on peer nominations.  The award recognizes Carolyn’s long and productive career of service and advocacy for children and families. Her work is at the interface of medical and psychological care, and consistently promotes an integrated approach that assures that children and families receive the care that they need.  This “story behind the SPP awards” was prepared by reviewing Carolyn’s CV and articles and includes information from a telephone interview.

Carolyn grew up on a farm in rural Pennsylvania and initially planned to pursue a career in medical technology.  At Thiel College in Greenville, PA she majored in biology but shifted her focus to psychology based, in part, on her experiences during a year abroad and on the inspiration of a psychology professor, Georgiana Starry (1903-1975). Dr. Starry required students to spend time with a child each week for a year recording their development . This was a transformative experience for Carolyn as she headed to the University of Pittsburgh to complete a masters (1963) and Ph.D. (1966) in Clinical Psychology. Like most clinical training at that time, her program was geared towards adults and psychoanalytically oriented. However, Carolyn maintained her interests in children, including during her internship and fellowship training at Pittsburgh Child Guidance Clinic, laying the groundwork for her subsequent professional career in pediatric and clinical child psychology.

Carolyn was based in Chapel Hill, N.C. for thirty years.  She held a variety of positions in the Departments of Pediatrics and Psychiatry at the University of North Carolina (UNC) and served as the Psychology Section Head at the Division for Disorders of Development and Learning in the UNC Child Development Institute.  A major influence for Carolyn was the experience of working in a University Affiliated Program (UAP) with its multidisciplinary model of care for children with autism and developmental disabilities. The range of patients seen there was broad. Carolyn observed how these children faced many of the same developmental and behavioral issues as more typically developing children. This sparked her interest in developing behavioral approaches that could be generalized for treating a range of clinically important problems. She also understood the importance of treating children in context and involving families and other systems essential to the wellbeing of these children (Schroeder & Schroeder, 1990).

Carolyn is one of the very first pediatric psychologists to work in primary care, beginning as a consultant with pediatric practices in 1973. She published a paper on this work in Volume 1 of the Journal of Pediatric Psychology (Schroeder, 1979). When she first approached practices, pediatricians suggested that she use the early morning “call in” hour as many parental concerns were related to behavioral problems (Schroeder, 1983).  This experience led her to develop her brief telephone protocol for treating common behavioral concerns.   This work included training pediatric residents and psychology interns/post-doctoral fellows in the management of common behavior problems in primary care settings. She has written extensively about her experiences and this information remains highly relevant with the current focus on primary care (Schroeder, 2004).

A review of Carolyn’s CV shows the tremendous breadth of topics that she has written about, including (but not limited to) learning disabilities, behavior problems, sexuality, self-injurious behavior, personality disorder, child sexual abuse, death, impact of separation/divorce, sleep, and speech therapy.  Carolyn was a pioneer in establishing a specific practice related to the problems identified in primary care pediatric practices.  By the early 1980’s she had expanded this work and transitioned from the university setting into a clinical practice in a pediatric primary care practice. In 1990 Carolyn moved to Kansas where she began her longstanding contributions to the then newly established Clinical Child Psychology program at the University of Kansas. She also commuted to North Carolina to continue her clinical practice as well as consult on research focused on children’s memory that was carried out in pediatric primary care settings (Gordon, Schroeder, Ornstein, & Baker-Ward, 1995)

Throughout all of her work Carolyn collected data and continued to write and describe her innovative clinical activities. She has written many practical books and articles, providing pragmatic evidence based guidance for clinicians and parents.  A third edition of her book Assessment and Treatment of Childhood Problems: A Clinician’s Guide (Schroeder & Gordon, 2002), is in preparation.  She has also edited books with broad guidance for clinicians across pediatric and behavioral conditions (Ollendick & Schroeder, 2003).  Carolyn is also an exemplar of a clinician who remained highly active on a national level throughout her career.  She has served on many task forces and workgroups in children’s health.  She has served as President of Division 37 of APA and of the predecessors of both Division 53 and 54, as well as Secretary-Treasurer for Division 54 (when these were Section 1 and Section 5 of Division 12). She served as a series co-editor of Child, Youth and Family Services, acting editor of the Journal of Autism and Developmental Disorders, and on the editorial board of major journals in child clinical and pediatric psychology.

Clearly Carolyn Schroeder’s many contributions to pediatric psychology and her groundbreaking and consistent work in delivering care to a broad range of children and families make her an ideal role model for current and future generations of practicing pediatric psychologists.