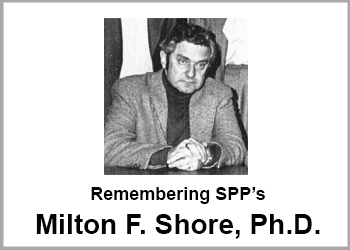 Pediatric psychologists today may take children’s hospitals for granted, but for the most part the hospitals did not exist in large numbers or with a humane, family-centered, psychosocially supportive orientation even as late as the 1960s and 70s. The children’s hospitals that did exist were not always child-friendly places despite presumably being devoted to serving children. In the early years, children were separated from their parents in hospitals and given invasive and painful medical treatments away from their families and no form of psychosocial care, sometimes for lengthy periods of time. Additionally, because there was the assumption that young children did not register pain in the same way as adults, infants and young children were denied anesthesia and other pain medication. They often returned home with significant behavioral problems.

Milton F. Shore, Ph.D. (1928-2017) had a vision to create humane policies and procedures that support young patients in their treatment and recovery with attention to psychosocial needs. Most relevant to today’s pediatric psychologists is that he wrote a visionary monograph called Red is the Color of Hurting: Planning for Children in the Hospital (published in 1967 by the U.S. Government Printing Office).

When it first opened in 1973 as the Minneapolis Children’s Health Center (now Children's Minnesota Hospital), the new hospital relied on the book to give greater attention to supporting children with “emotional security,” changing medical procedures, and incorporating child facilitative architectural designs. This attention even went to the various colors of the smocks of the medical personnel and volunteers to designate who would do procedures that would hurt. Red is the Color of Hurting was recognized as so influential in effecting the hospital practices and policies that a copy of it was placed in the cornerstone of the hospital building.

In other influential publications, Shore and Stephen Goldston guest-edited a special issue of the Journal of Pediatric Psychology on “Families, Children, and Hospitalization” (1976). They also authored a chapter entitled “Mental Health Aspects of Pediatric Care: Historical Review and Current Status,” published in Phyllis Magrab’s 2-volume set: Psychological Management of Pediatric Problems (1978). This chapter outlined the history of childcare in hospitals in the US and internationally, while laying out principles to improve medical, mental and emotional health care.

Shore was a forceful advocate for children, adolescents, and their families (e.g., Shore, 1971, 1979, 1998). In advancing a knowledgeable and determined advocacy, he sought to fulfill “a vision of what is a just and equitable society—clearly a prerequisite for the mental health of the citizenry” (Shore, 1981, p. 398).  Melton (2014) described Shore’s goals as “the development of services for individual young people that enhance their strengths and respond to their interests and needs” and to be “an advocate for social responsibility in the mental health professions” (p. 609). As a major accomplishment, Shore was a founder of the American Psychological Association (APA) Division 37, Child, Youth, and Family Services (now the Society for Child and Family Policy and Practice) which presented its initial mandate: “the advocacy of the formation of social policy based on knowledge and data” (Shore, 1998, p. 475). The Division carries on this foundational principle “committed to the application of psychological knowledge to advocacy, social justice, service delivery and public policies affecting children, youth and families in a diverse and inclusive society” (APA Division 37, 2020).  He was a pioneering member of the Society of Pediatric Psychology, and as recently as January 2015, expressed surprise that the organization was not more active in supporting psychosocial policy development and affiliating with other organizations such as the Institute for Patient and Family Centered Care (in an email “chiding” the SPP board).

After graduating from Harvard College (BA Psychology, 1949) and earning an MA (1950) and Ph.D. (1955) from Boston University in Clinical Psychology, he served as a staff psychologist at the Worcester Child Guidance Clinic. He subsequently became a significant contributor through his position as associate director of the Mental Health Center at the National Institute of Mental Health. He served leadership roles in professional organizations in psychology and psychiatry (such as the American Orthopsychiatry Association and its journal; the Joint Commission on the Mental Health of Children, the White House Conference on Children, in addition to Division 37). Shore received many honors and was recognized for his professional contributions by APA and Ortho (see Melton, 2014; Woody, 2018).

In composite, Milt Shore’s publications, professional activities, and child advocacy were influential in effecting positive change. Indeed, the institutions that we now have, where so many pediatric psychologists provide beneficial services, would not be present without his (and others’) foundational work. His perspective of current affairs likely would be that the society and mental health professions have much work to do in order to improve the lives of children and their families, but he would probably state it more forcefully and bolstered with erudite scholarship.